To share your memory on the wall of Bruce Hammond, sign in using one of the following options:

Friends, neighbours and relatives will be received by the Hammond Family on Tuesday, January 14th, 2020 from 4:30 to 8:00pm at the MAURICE J. VERHOEVE FUNERAL HOMES BURIAL AND CREMATION SERVICES INC., 40 Queen Street, Langton (519) 842-4238. A Private Family Interment in the Langton Baptist Cemetery conducted by Pastor Al Wilson of the Langton Baptist Church. Memorial donations by cheque or on our website may be made to the “Langton Baptist Church” or any charity of your choice through the Verhoeve Funeral Homes, entrusted with all funeral arrangements.
Read Less

Receive notifications about information and event scheduling for Bruce

We encourage you to share your most beloved memories of Bruce here, so that the family and other loved ones can always see it. You can upload cherished photographs, or share your favorite stories, and can even comment on those shared by others.

Posted Jan 15, 2020 at 10:14am
Tim, Cheryl and families: So sorry to have learned of your Dad’s passing. Losing a much loved parent is always difficult, but perhaps there is some comfort in knowing that he has now been reunited with your Mom and Ken. Please accept our sincere sympathy upon your sad loss.
~The Anscombe family
Comment Share
Share via:

Posted Jan 14, 2020 at 02:33pm
Tim and Cheryl and families: Our deepest condolences on the loss of your dad and grandpa. Hoping you can find peace in your memories of him and knowing that he is with your beautiful mom. Keeping you all in our prayers.
Comment Share
Share via:
CB

Posted Jan 13, 2020 at 11:07pm
Since we cant plant the whiskey, we will have this tree planted instead. You will be dearly missed Papa Bruce.

Posted Jan 13, 2020 at 10:06pm
I am truly sorry to hear of the loss of Bruce. Please accept my condolences and may my prayers help comfort you.
Kim Rice
Comment Share
Share via: 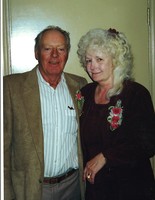