To share your memory on the wall of Carl Wilkens, sign in using one of the following options:

In keeping with Carl’s expressed wishes there is neither funeral home visitation nor a funeral service. MAURICE J. VERHOEVE FUNERAL HOMES – BURIAL AND CREMATION SERVICES INC., 262 Broadway Street, Tillsonburg has been entrusted with Carl’s cremation service. Carl is to be interned in Florida at a later date. Memorial donations in Carl’s memory to Tillsonburg District Memorial Hospital Foundation can be made online or by cheque through the Maurice J. Verhoeve Funeral Homes, 262 Broadway St., Tillsonburg (519)842-4238. Personal condolences and favourite memories may be left at verhoevefuneralhomes.com
Read Less

Receive notifications about information and event scheduling for Carl

You will receive any future notification messages.
No funeral details available.

We encourage you to share your most beloved memories of Carl here, so that the family and other loved ones can always see it. You can upload cherished photographs, or share your favorite stories, and can even comment on those shared by others.

Posted Aug 17, 2019 at 05:27pm
Dan and Mary,
I am sorry to hear of your Dad's passing. I always enjoyed talking with him when I saw him
out and about. He will be missed. My thoughts are with you at this time.
Debra Ravin

Posted Aug 10, 2019 at 12:54pm
My condolences to my sister Ruth and the Wilkens family. Carl was a good brotherinlaw,whenever I would visit I was always made to feel welcome, he was a good friend and I loved him and Ruth. Even though in the last few years I didn't visit very often I thought of them all the time. I shall miss Carl knowing he is gone,I can still see him sitting at the table with a smile on his face.
Comment Share
Share via:
SB

Posted Aug 09, 2019 at 11:20am
Ruth, Dan and Cindy, Mary and Joe! Carl was a wonderful man and will be missed by many, Our condolences to all the family. When i am driving by him he always had a wave and a smile.
Laurie and Dave Wilson
Comment Share
Share via: 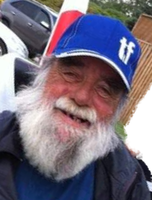