To share your memory on the wall of Harry Leach, sign in using one of the following options:

Print
The Leach family is saddened to announce the passing of Harry Richard Leach on January 27th, 2020. After a courageous struggle with cancer, he passed with his family by his side at the V.O.N. Sakura House in his 85th year.

Born to the l... Read More
The Leach family is saddened to announce the passing of Harry Richard Leach on January 27th, 2020. After a courageous struggle with cancer, he passed with his family by his side at the V.O.N. Sakura House in his 85th year.

Born to the late Archie and Margaret (Scott) Leach, Harry lived most all of his life in the Brownsville area before becoming a resident of Tillsonburg. He was an avid outdoorsman who enjoyed fishing and snowmobiling. Harry lived his values of hard work and honesty. He was a dedicated volunteer firefighter of the Brownsville Fire Department for over 20 years. Harry and his brother Donald operated Leach Bros. Trucking for 50 years. Harry was cherished by his wife and best friend Shirley (Bowen) Leach for 62 years. Beloved father and father-in-law to Brian and Maryanne Leach of Norwich, and Jane and Erwin Dely of Vanessa. Proud and loving “Pa” to granddaughters Jena (Kyle) and Lauren Dely. He was adored by many nieces and nephews. Survived by his sister, Edith Burgess (late Russell) of Tillsonburg. Predeceased by 5 siblings; Harold Leach (late Ila), Laura Corbett (late Jack), Donald Leach (late Patsy), and Margaret Kipp (late Charles).

In keeping with Harry’s wishes cremation has taken place. Everyone is invited to attend a Celebration of Harry’s Life, which will be held on Saturday, February 1st, 2020 at the MAURICE J. VERHOEVE FUNERAL HOMES – BURIAL AND CREMATION SERVICES INC., 262 Broadway Street, Tillsonburg. Visitation 10:00 am to 1:00 pm. Memorial Service in the funeral home chapel at 1:00 pm by Troy Kitching. Luncheon to follow at the Mount Elgin Community Centre – 333204 Plank Line, Mount Elgin, ON. Donations in Harry’s memory to the “Canadian Cancer Society (Lung Cancer Research)” would be gratefully acknowledges by the family and may be made through the Maurice J. Verhoeve Funeral Homes- Burial and Cremation Service Inc., 262 Broadway Street, Tillsonburg (519-842-4238), entrusted with all funeral arrangements.
Read Less

Receive notifications about information and event scheduling for Harry

We encourage you to share your most beloved memories of Harry here, so that the family and other loved ones can always see it. You can upload cherished photographs, or share your favorite stories, and can even comment on those shared by others.

Posted Feb 02, 2020 at 12:23pm
I had Harry and Shirley as neighbours growing up, and they were always so nice, letting me play in their yard and dirt mounds. Happy memories of him and the family, I wish we'll to you all. I am sorry for your loss.
Jennifer Young
Comment Share
Share via:

Posted Feb 01, 2020 at 09:34am
My condolences to Shirley and family, its so sad to see such a great man leave us. Harry would always have the time to say hello and had time for a conversation. You will be sadly missed. (Debbie)
Comment Share
Share via:
JD

Posted Jan 31, 2020 at 01:08pm
In August of 2019 Dad built a fence to finish off his backyard. After he finished building it he thought he had maybe pulled muscle in his chest. He went to emerg and they took a chest x-ray. The Dr. on call told him there was large tumor on his right lung and it could be cancer. In September he was diagnosed with Stage 4 lung cancer. He did all 15 radiation appointments but was too weak to continue with the chemotherapy. The cancer took over quickly and although Dads pain was very hard to manage he never complained. Through it all Dad never gave up and never lost his sense of humour. He was the "Rock" of our family and words cannot describe our pain.
Dad's passing could have been prevented with early detection. If we can save one person or family from going through this devastating disease we ask everyone to go get a chest x-ray. It could save your life!
Love and hugs to all for your messages and support,
Jane

Posted Jan 31, 2020 at 10:20am
Shirley, Brian , Jane & family Wishing you peace to bring comfort, courage to face the days ahead and loving memories to forever hold in your hearts

Flowers were purchased for the family of Harry Leach. Send Flowers 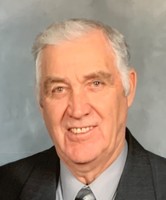 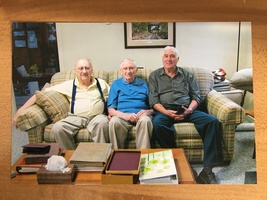 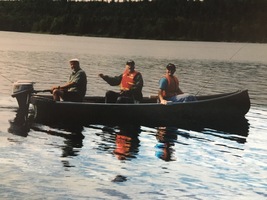 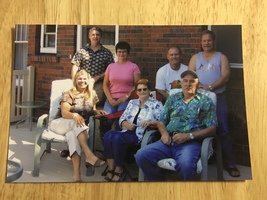