To share your memory on the wall of Madeleine Fasseel, sign in using one of the following options:

In keeping with Madeleine’s wishes, cremation has taken place. There will be no visitation nor a formal memorial service. Madeleine’s family will congregate on Saturday, June 20th in the Tillsonburg Cemetery to privately share memories and remember her Life and Legacy. Please feel free to leave a condolence, share memories or photos, or donate in Madeleine’s memory (at www.verhoevefuneralhomes.com) to the “Tillsonburg Memorial Hospital Foundation” through the MAURICE J. VERHOEVE FUNERAL HOMES - BURIAL AND CREMATION SERVICES INC., Langton (519-842-4238), entrusted with all cremation arrangements.
Read Less

Receive notifications about information and event scheduling for Madeleine

Donations are being accepted for: TILLSONBURG DISTRICT MEMORIAL HOSPITAL FOUNDATION.

We encourage you to share your most beloved memories of Madeleine here, so that the family and other loved ones can always see it. You can upload cherished photographs, or share your favorite stories, and can even comment on those shared by others.

We are thinking of you all during this difficult time . Please accept our sincere condolences
RIP Madeleine

Posted Jun 18, 2020 at 05:59pm
We want to express our sympathy and let you know that our thoughts are with you all. Bill and Sandra Bridgeman 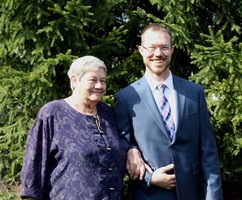