To share your memory on the wall of Nina Hollister, sign in using one of the following options:

Nina was a member of St. Paul’s United Church and a Life Member of the United Church Women. Funeral arrangements have been entrusted with confidence to the Maurice J. Verhoeve Funeral Homes- Burial and Cremation Services Inc., 262 Broadway Street, Tillsonburg 519-842-4238. Friends and relatives are invited by the Hollister family to a time of visitation on Thursday, September 26th, 2019 from 10:00 a.m. to 12:00 noon, in the former Delmer United Church, 312281 Dereham Line, to Celebrate and share memories of Nina’s Life. A Funeral Service will be held on Thursday, September 26th, at 12:00 noon in the former Delmer United Church, 312281 Dereham Line, by Rev. Karlene Brown-Palmer and Rev. Maurice Francis, of St. Paul’s United Church, Tillsonburg. Interment follows in Hollister Family Plot in the New Delmer Cemetery. In keeping with Nina’s wishes, memorial donations to “V.O.N -Sakura House” would be gratefully acknowledged by the family (in memory of Bill) and can be made through the funeral home.
Read Less

Receive notifications about information and event scheduling for Nina

We encourage you to share your most beloved memories of Nina here, so that the family and other loved ones can always see it. You can upload cherished photographs, or share your favorite stories, and can even comment on those shared by others.

Posted Sep 24, 2019 at 12:27pm
Dear Grandma, Being with you was always a highlight for all of us. You are so loved and will be greatly missed.

Flowers were purchased for the family of Nina Hollister. Send Flowers 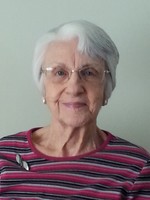