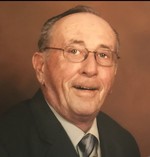 Passed away, after a four-year long journey with lung cancer, at Extendicare, Halton Hills on April 13th, 2020, Robert Cyril Coppens Sr., of Georgetown and formerly of Tillsonburg, in his 82nd year. Born on a tobacco farm 3km north of Lake Erie on January 31, 1939, to the late Maurice Coppens and late former Maria Elbode. Robert farmed tobacco for 39 years in the Langton area (just west of Deer Creek Dam at the corner of HWY 45 and Hazen Road), alongside his much-loved wife of 60 years, Georgette Coppens (Van Belle). It was here they raised their family of three children: Bobby Coppens Jr., of Tillsonburg; late Richard Coppens (1984) and Roxanne (Jeff) Van Damme, of Georgetown. Robert was particularly proud of his two grandsons Alex Van Damme and Zach Van Damme. Predeceased by his sisters Agnes Deroo (2008) (late husband Andrew 2013) and Elza ‘Elsie’ Bolle (2019) (late husband Michael 2017). Robert loved to share with friends and family tales of his life, and he enjoyed telling jokes to make others laugh. He also made sure everyone knew he was proudly computer literate. We will miss your text messages Dad/Grandpa! Thank you to the staff at Harvest Crossing in Tillsonburg, Stonebridge Community Services in Tillsonburg, Extendicare Halton Hills, and also to extended family members and friends for the kindness and compassion shared during this difficult time.

In the wake of the COVID-19 pandemic, a private family viewing will take place in the Maurice J. Verhoeve Funeral Homes- Burial and Cremation Services Inc. Chapel, 40 Queen Street, Langton. Cremation follows with a private graveside service later in the Sacred Heart Cemetery, Langton. On Robert’s tribute page (at www.verhoevefuneralhomes.com), relatives, former neighbours and friends are invited to share their favourite photos, memories, express condolences or make memorial donations in honour of Robert to the “Canadian Cancer Society” through the Maurice J. Verhoeve Funeral Homes (519-842-4238), entrusted with all arrangements. A Celebration of Life will be held by the family at a later date with details to be announced in the future.

This obituary is protected by copyright by Tillsonburg. Proudly Serving the Community of Tillsonburg. Tillsonburg is located in the province of Ontario, Canada.