To share your memory on the wall of Robert Cross, sign in using one of the following options:


As a result of Covid-19 pandemic, a private family visitation and Complete Private Family Funeral Service by Pastor Paul Robinson to take place at the MAURICE J. VERHOEVE FUNERAL HOMES – BURIAL AND CREMATION SERVICES INC., 262 Broadway Street, Tillsonburg. On Robert’s tribute page (at www.verhoevefuneralhomes.com), relatives and friends are invited to share their favourite photos, memories, express condolences, send flowers or make memorial donations in Robert’s memory to the “Royal Canadian Legion Poppy Fund” or to the “Tillsonburg Royal Canadian Legion Fund,” through the Maurice J. Verhoeve Funeral Homes (519-842-4238), entrusted with all funeral arrangements. A Legion Zone District Memorial Service Tribute for Robert will be edified by the Officers and members of the Royal Canadian Legion Br. #153 and District members at a later date with details to be announced in the future.
Read Less

Receive notifications about information and event scheduling for Robert

Donations are being accepted for: THE ROYAL CANADIAN LEGION, BRANCH 153, POPPY FUND.

We encourage you to share your most beloved memories of Robert here, so that the family and other loved ones can always see it. You can upload cherished photographs, or share your favorite stories, and can even comment on those shared by others.

Posted Apr 23, 2020 at 05:17pm
It is with heavy hearts, my wife and I give our deepest sympathy and condolences to Mary and the Cross family, on the loss of a great man. Robert served on the executive while I was President, of Branch 153 from 1992-1994, as Sgt at Arms and today that picture of Barbara Ann Scott, famous figure skater, with Robert, my wife and I which hangs on our wall at home, which we will always cherish in our hearts. Robert and Graham Turner were best of friends and now they meet together in heaven along with their wives, Barbara and Edna. These people were legends and true friends. Thank for your service Robert and Graham....you both have made Canada proud for your R.C.A.F. service. Many and I say many will miss you all/ It is so hard to say good-bye to a true hero. Our Canadian Flag, at home continues to fly at half mast, to honour our veterans who all have served with dignity, courage and bravery for their Country. "WE WILL REMEMBER THEM" May you rest in peace and someday we will all meet together. All our love Lee and Paul B. Woods
Comment Share
Share via:
GW

Posted Apr 21, 2020 at 12:51pm
Glen Williams, St.Thomas
Sending our condolences on behalf of the Don & Hazel Williams Family. Roy (as my father called him) and Don were very close. Being first cousins born in the same year, raised on the farm and both served in the airforce during WW2. Always looked forward to seeing and visiting with Robert at the Baker Picnic. I managed to find a couple of pictures that my Dad had. One of Robert in his airforce uniform and one of his family from 1938. Sincerly the Williams Family.
Comment Share
Share via:
PU

Pauline and family in UK

Posted Apr 19, 2020 at 12:00pm
Mary, Alison, and Family:
We are so sorry to hear about Robert's passing. We certainly know how much he meant to all of you, as Alison frequently spoke about him during lunches that Alison, Sheila, and I have had together. He certainly cared about those around him, and they appreciated everything that he did. His dedication to country, family, and community will not be forgotten. I hope the wonderful times that you shared together will help you at this difficult time. Karen and Dale Robinson
Comment Share
Share via:
CS

my dear friend robert you are missed by me trainingme at meals on wheels for years we had such a good time then you arrived at von i salute you sir for your service to this great country. it was a blast at your 100th birthday party. oh you are so loved and will be missed by many. i will never forget the smile on your face or the twinkle in your eye. rest in peace until we meet again. love connie shuga 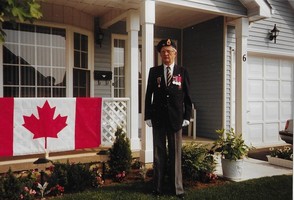 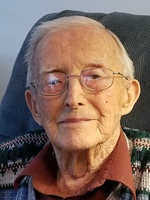